Corporal Anthony (Tony) L. Starcer who unfortunately passed away in 1986, created some of the most recognisable and universally loved nose art pieces of the second World War. Though his prolific talents are now famous around the world, back in the 1940’s his skill was discovered by chance. During training at the Texas USAAF base Sheppard Field, Starcer happened upon a man painting a mural on the wall of the officer’s club. After criticising the use of colour he was challenged to do better, he rose to that challenge and did just that, in the end finishing the mural. As line mechanic for the 91st Bomb Group based at Bassingbourn England (which by the way is only about 30 miles from where I live) in 1942-3 Starcer was assigned the menial task of painting the official markings such as Squadron letters and aircraft codes onto the B17’s. It was not long until by popular demand he quickly added an array of buxom beauties to his repertoire. As his skill improved and his reputation expanded he painted many a beautiful lady on the nose of a beauitiful aircraft and the 91st soon sported some of the most accomplished art work of the war. With no proper materials to hand Starcer worked with what ever he could lay his hands on, often merely house paints which he would water down with linseed oil to create the required consistency. One can imagine the uncomfortable conditions under which he produced these amazing works of art, the rain storms, biting cold and windy weather which England is famous for, yet he never let the environmental constraints get the better of him and produced an array of dazzling images.

The speed in which he could produce these works was also impressive, being able to produce a nose art piece in less than a day and still have time to produce smaller designs on the crewmen’s jackets. The list of his work on the 91st Bombardment Group website lists 124 pieces of art, these included two of my favorites “Memphis Belle” and “Shoo Shoo Baby”, which thanks to restoration have survived to this day for our generation and many more to gaze upon and appreciate. Like many a wartime artist Starcer retired the paint brushes after the war and for 23 years had little room for painting his life, save maybe for a little DIY though he was to return to it in later life. In the 1970’s the love of vintage began and there was an influx of interest in wartime nose art. This interest bought Startcer out of his artistic retirement and he began to paint renditions of his earlier work and even redid the art work on “Shoo Shoo Baby” during her retoration in the 1980’s.

The Boeing built B17 which became the beautiful Memphis Belle was delivered to the 91st Bomb Group based at Dow Field, Bangor, Maine, USA in September 1942. After a months stop off in bony Scotland the B17 found its permanent base at Bassingbourn, England. As with many an aircraft in the second World War the naming of this B17 was sparked by someone a member of the crew had left behind, in this case she was named for the pilot Robert K. Morgans sweetheart Margaret Polk who longed for him at home.

Starcer painted both sides of the nose, basing his work on the George Petty pin-up girls which were popular at the time in Esquire magazine. Morgans crew went on to fly 25 missions with the 324th Bomb Squad, 21 of those being in Memphis Belle. Memphis Belle flew a total of 25 missions between November 1942 and May 1943 becoming the first Air Force bomber to complete a tour. The last of which, with a different crew was flown on May 19th 1943 (my birthday, though obviously quite a few decades before I was actually born). It was to Kiel, Germany and was later flown back to the United States by Morgans crew on June 8th 1943 where it undertook a tour to raise money for war bonds.

The Boeing made B17 (42-32076) was not named for a loved one as was the norm, in fact you could say that “Shoo Shoo Baby” was named after three loved ones. Named after the Andrews Sisters hit song of the same name which was a favorite of Crew Chief T/Sgt. Hank Cordes. I wonder how Cordes felt in 1944 when another “Shoo” was added after the original aircraft commander completed his tour of duty and a new pilot was at the helm. The aircraft was originally accepted into the Air Forces in January 1944 and arrived in England shortly after wards in March of the same year, it flew 25 missions with 9 different crews. 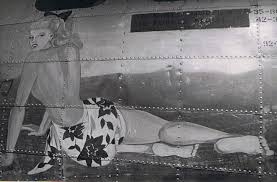 11 thoughts on “From Belle to Baby”